HOW
It's hard to remember how my passion about Sweden and Swedish artists started...
I've been filming concerts in Paris for many years now, and among the bands I filmed, a lot were scandinavians.
I think the first ones were Jose Gonzalez, The Tiny, I'm From Barcelona, Peter Bjorn and John, Thomas Dybdhal...when they first played in France.

Then my preference in swedish ones might come from when I first saw Anna Ternheim in 2005, it was at the swedish institute. I never knew there was such a place here, and I thought it was fun to be around swedish people. There, really started my interest in the swedish culture.
Following Anna I discovered Ane Brun (I know she's norwegian, but she's been living in Stockholm for many year now, so she's an exception!)
She might actually be the 1st one I filmed actually...but It's too far away to really remember. I filmed too many bands...
From her, over the years I got to discover other artists like Tobias Fröberg, The Tiny, Teitur (who is from the Feroe Islands..) and more recently, Jennie Abrahamson, Rebekka Karijord (aslo a norwegian living in Stockholm) and Linnea Olsson.
All of them are my inspiration and give me the strenght and confidence in doing this.

So after following and filming those bands everytime they came to Paris, a releationship of trust has been built.

WHAT
In 2008, my friend Christophe came up with the name and logo "I Love Sweden" as an idea of creating together a collectif of graphic/video design that never happened...And when I started doing videos in Sweden, I decided it was perfect to use this trademark. So all this concept kinda started thanks to him!
(Check out his website, cool stuff too: www.from-paris.com)

We went together to Stockholm for the first time in March 2008 and I loved it! The city is so beautiful and with such a cool atmostphere ; I went there few times over the years and while I was there I thought it was the occasion to go see my fellow musician friends, and do some videos with them!

Later I had this idea of making a documentary with the artists I knew who lived in Stockholm ; I wanted to make portraits and show the human and friendly side of them, go meet them where they live and let them share their music in acoustic sessions. So in August 2010, I had the chance to find quite a lot available for this project.
The result, a 65 minutes film called "Sounds of Stockholm" where I go from an artist to another ; just simple sessions filmed in different spots of Stockholm. It was pretty well received, though not so much spread out, but all the bands who participated loved it.

After that I wanted to develop the concept "I Love Sweden" by creating a website dedicated to the swedish music scene.
In France, we have a lot of music blogs doing acoustic sessions, and I didn't want to do exactly the same kind of videos filmed in Paris ; I wanted to go meet the artists where they live and get to know who they are ; so my concept is to only have sessions filmed in Sweden.
Plus I think it's nice to also discover the city which is mostly Stockholm for now...I try to travel more around the country but then it takes more time and money..

WHY
My idea for this website, is to showcase swedish artists, and make people discover bands they never heard of and would never have if they don't live in Sweden. Some are big there, other not ; sings in English or Swedish (which sounds really good!).
I think there's lots of great bands that deserve to be known ; and hopefully this will help them get noticed, play shows, and in Paris too I hope!

So this website is dedicated to all the swedish artists, especially the ones who have been part of it untill now. Lots of them are very good and close friends, and I'm so grateful to know them. Thanks for sharing your life and music, helping me out when I needed a place to stay! and just being my friends. You'll all part of my life, and I hope this website will become something interesting for everyone and that it will help out some of you.

As for me, this is only me doing all this on my own.
I film and edit everything. I carry big bags and run around the city to go meet bands. (the only occasion for me to exercice I guess!)
I unfortunately don't earn money from this (sometimes I get few paid projects), I spend a lot in travel, and too expensive subway cards!

I Love Sweden is also a video production company, so if anyone have budgets for music videos, documentaries, EPK, filming concerts
OR advertisement animations as my real job is Motion Designer.
I'm opened to any projects especially in Stockholm, I'd love to live and work there. contact me or spread my name around!
But in Paris too of course ; to any french label or advertisement company I'm available! 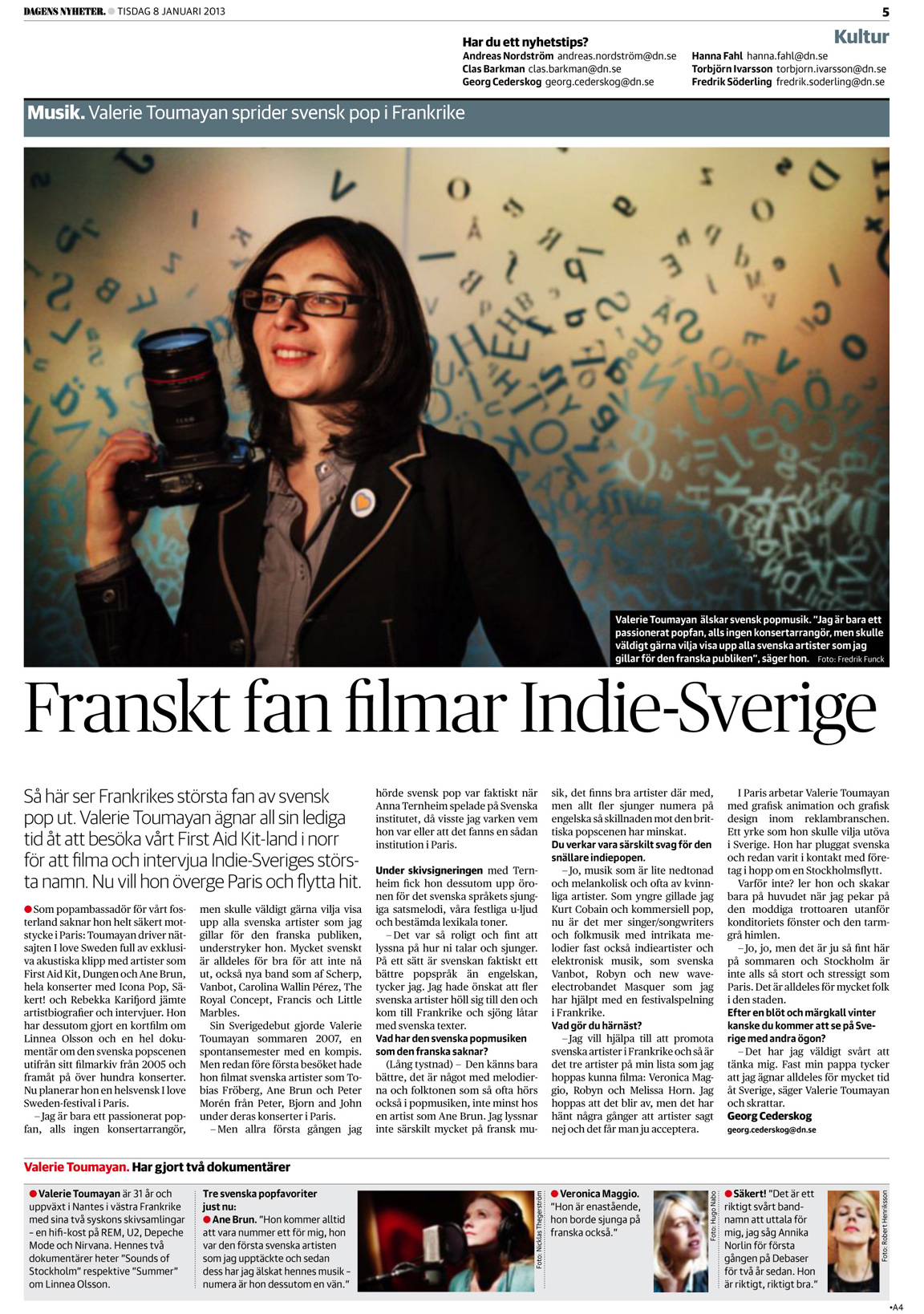 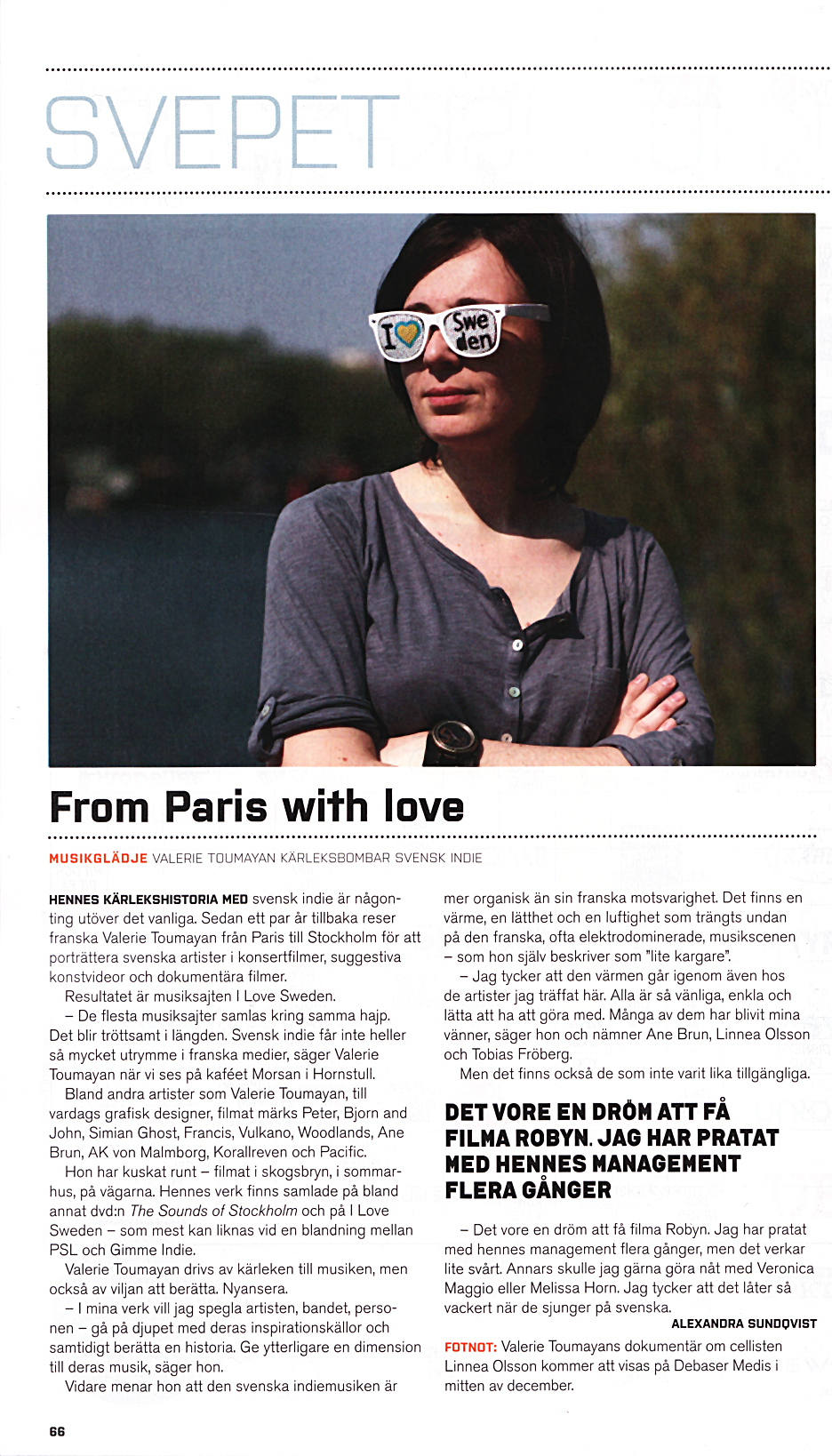 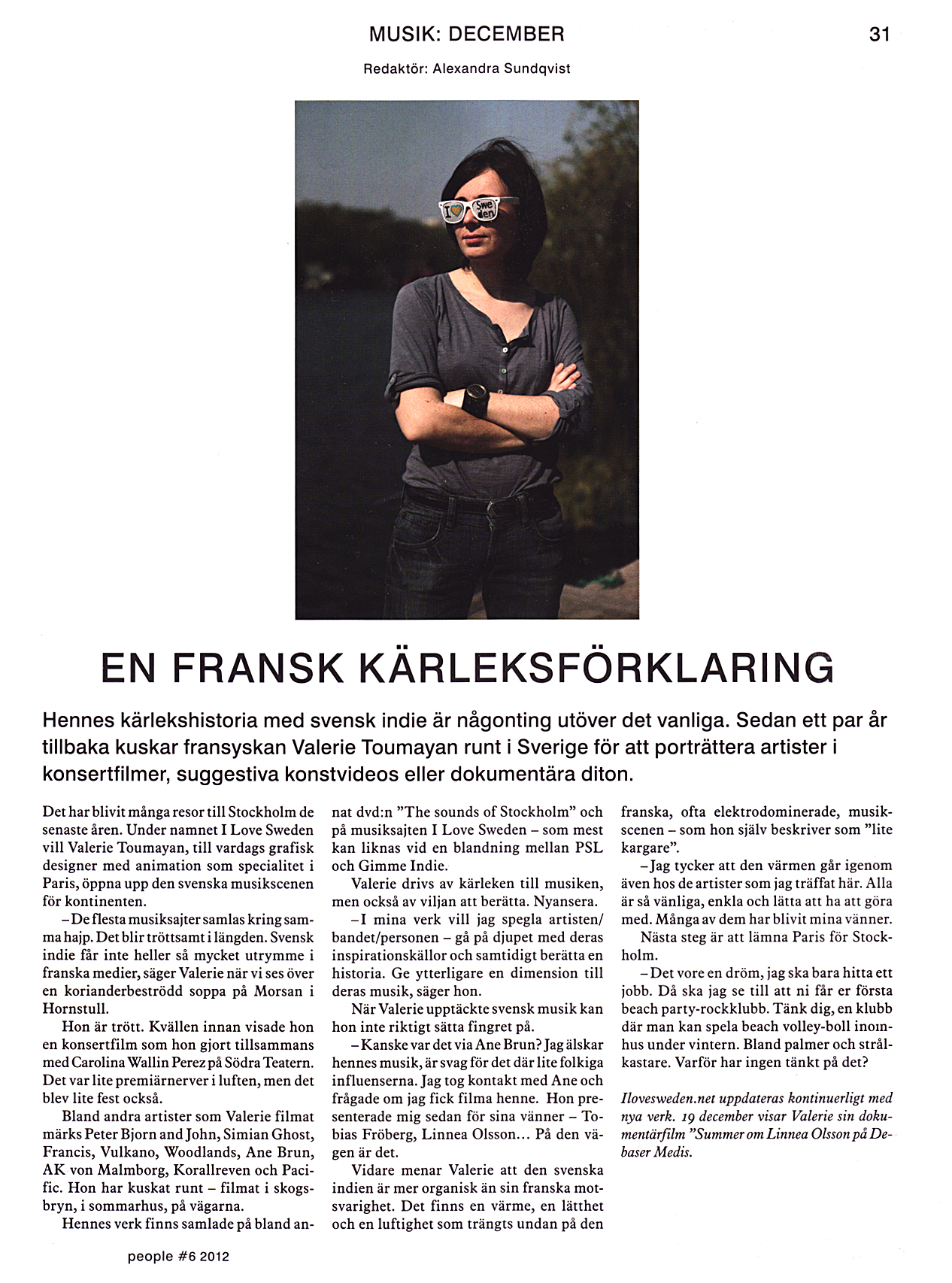